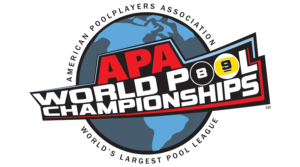 A Double Jeopardy division is actually two separate divisions in one. The Double Jeopardy format allows players to play on both an 8 Ball and a 9 Ball team. Both team matches are played on adjacent tables at the same time. Since both team matches are played at the same time, it doesn’t add any more time to your league night. The 8 Ball and 9 Ball teams don’t have to be identical. Some of the players may choose to be on only one of the teams, and additional players can be added to the other team.

Wow! Tell me more!…Team rosters can either be the same on ‘both’ your teams (the most common) or your team may actually consist of separate 8 Ball and 9 Ball rosters. Carrying anywhere from the minimum 5 players to a maximum of 16 on both teams.

What are the benefits of Double Jeopardy?

Well to begin with, it’s TWICE THE FUN! You should never have to sit all night, you will play 8 ball or 9 Ball or maybe BOTH if you want. It’s Double your chance for yoru team to Qualify for the Finals. It’s TWICE THE ACTION for all you pool junkies! What else?… Well, for those of you that only have one night free a week for pool but can’t decide on either 8 Ball or 9 ball, this is your perfect solution… a 2-for-1 deal!

What else should I know?…

All APA Double Jeopardy division locations needs to have a minimum of 2 pool tables available for double jeopardy league play.